It is impossible to stop the rain. But it is possible to minimize floods, or at least be prepared them. Unfortunately, what (has) happened in Jakarta (is) just the opposite. It (has) long been predicted that major flooding would hit the city. In 1996, it was severely affected, and then, there was a warning such a disaster could happen once every five years.

The above is taken from the website of the Indonesia Water Partnership and was written, yes, five years ago.

Acts of God or acts of Satan? Jakarta Governor Sutiyoso's storm troopers, the city's so-called public-order officials who implement his war plan against the weak and the poor, have been forced to run for shelter this week from rainstorms that have flooded the city.

Perversely, mighty floods lead to a lack of clean water, a topic I wrote about just over a year ago.

And two years ago I also used the headline Marooned.

In 2000, Jakarta Governor Sutiyoso gave this reason: "The capital will never be free from floods unless it has a drainage canal at the city's east and west border areas to facilitate drainage to the sea. Actually, we have had the master plan of the canals since 1975, but due to budget problems (corruption?) we could not build them.

"The only other option to escape being annually inundated during the rainy season is to move the city from the current location," the governor said.

He also said that floods were unavoidable because 40 percent of the city is located in the lowlands and he also blamed Mother Nature and squatters living along the riverbanks.

These are some of this year's reported excuses.

A huge amount of rain that has fallen.
Building of housing estates in West Java and Tangerang.
Clearances of land for villas and resorts in the water catchment area of Bogor.
Disaster handling is poor.
East Jakarta flood canal is not yet built.
Failure to conserve water catchment areas.
Garbage thrown into storm drains and rivers.

And there are more, but then, thankfully, the reign of Governor Sooty ends this year. All that need be said about this year's floods, apart from them being historically the worst, is that social services and search and rescue teams were better prepared. And the response of local communities has been superb. 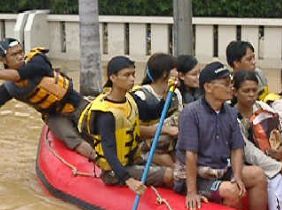 More blogging outpourings:
Marek experiences thuggery
Unspun
The ballet of the incompetents and the irresolute continues with no one seeming to take a leadership role in this crisis.
JakChat has a mixed bag of experiences and background info. Worth a read.
Java Jive
One of the worst things is that the vile canals have mixed in with the floodwaters, creating a potentially toxic, soupy mess that's entering people's homes.
Ferry Rahman
What surprised me the most were my cousin's official documents, including her high school diploma, birth certificates, etc. They were all just wet and damaged. Don't know how those are gonna get replaced.
Newly arrived Jenny and family
It is very hard to get any information about the current situation here in Jakarta (in English). I am getting most of my updates from the big western online news groups.
Technorati links and Blog Indonesia

STOP PRESS (Tuesday 5am)
Hear Jakartass on BBC Radio 5 Live. The archive is on line for one week only.
(My segment only is here. It clocks in at 6 mins 30 secs and is a 3.5mb mp3 file ~ thanks Del.)
Add (temperate) comments and reach a worldwide audience.