Lacking independence or originality of thought; unthinkingly following another; servile.

The adjective started out simply enough in the seventeenth century to refer to a person who was inclined to follow a leader; almost at once it took on the idea of slavishly or unreasoningly following the ideas of other people. It's unusual but still around.

I could discern omens of nothing newer than the old fate of the sequacious: to be for ever at the mercy of the exploiting proclivities of the bold and buccaneering in their bullying and greed.
[Prelude to Waking, by Miles Franklin, 1950] 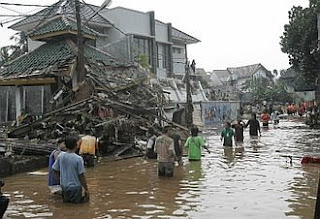 As Indonesia suffers yet another manmade disaster with the dam collapse on the borders of southwest Jakarta, along with thoughts of sympathy for the bereaved families there has to be a consideration of the causes. And these must surely lead to a change in the mindset of those who 'allow' such events to occur.

Much of what follows is taken from today's print edition of the Jakarta Post which hasn't posted the articles I'm quoting online as I write this.

This disaster was foretold long ago. Ridwan Saidi, a native Jakartan (Betawi) wrote in 1994 in his book Orang Betwai dan Modernisasi Jakarta that "men have caused ecological change. Yet the negative effect has not been felt. However, possible flash floods loom on the horizon as we can see from now."

Situ Gintung Lake, fed by River Pesangggrahan, was originally 31 hectares and a favourite recreational site. Until Thursday night it had shrunk to 21 hectares due to Greater Jakarta's "demands for more space for housing." The lake was also shrinking due to sedimentation and had become heavily polluted due to poor adherence to waste treatment regulations by industry and the general population. A further four lakes in the area have been filled in "due to the administration's lack of control over illegal occupation by local residents and housing developers."

These housing estates were generally up-market, but such development always attracts a labour force. This disaster therefore affects both rich and poor, although it must be noted that the upper classes tend to live on higher land. As always, it's the poorer folk who have suffered the most.

What has exacerbated the disaster has been the blinkered approach of administration officials. The dam was constructed during Dutch colonial times, without cement. Naturally it needs constant monitoring and maintenance. Not unexpectedly, it pains me to say, this was not considered important enough by the responsible agency.

Residents say "they had long been concerned with the condition of the sluice gate, which was rotting in parts and had not functioned properly for two years."

"We first reported the leaks in early 2007 to Pak Naseh, an official at the Tangerang Regency Irrigation Agency who daily control the lake."

Obviously they don't as no response was forthcoming.

Last year, through a "river and lake normalisation program, the government built an embankment jogging track on the lake's eastern shore, while the feeble sluice gate to the north was ignored."

SBY, Kalla, Bakrie and other major politicos yesterday took a break from electioneering in order to grab a photo opportunity and offer sympathy and 'promises' to rebuild the dam, and design it in "a proper way so that it will not cause any further public concerns."

Much as the Dutch did 76 years ago presumably. Except that they had civil servants who ensured that planning and other laws were enforced.