As I type this, SBY is visiting the site of two bomb explosions at 7.45 this morning at luxury hotels, the Ritz-Carlton and the Marriott in the business district of Mega Kuningan, central Jakarta. 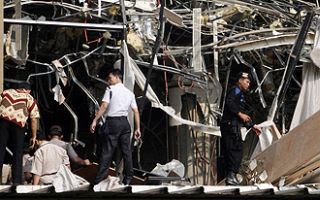 Four Eight (but maybe 9) people, including foreigners have been killed, one of whom reportedly (and coincidentally?) worked for Freeport.

As for who and why, this will probably take time as it is rare for perpetrators of these outrages to claim responsibility.

I'm going to conjecture that it isn't the work of the fanatic Islamic group Jemaah Islamiah but connected with domestic issues - Freeport in Papua, the election, a corruption case .....

This page of 'tweets' is being continuously updated.

Apparently there were 3 suicide bombers, which indicates that Islamic fanatics were responsible.

However, Manchester United were due to arrive tomorrow for a match against an Indonesian Select team on Monday. They'll have to change their hotel reservations as obviously the Ritz-Carlton is now out of commission.

An unnamed komisaris (company commissioner) of PT Freeport is hospitalised, along with 18 foreigners and 22 other Indonesians. 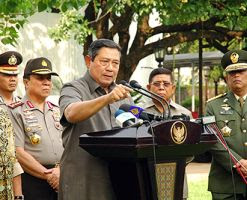 SBY has ordered the state intelligence community to speedily find out who did it. He's also hinting that there is a group trying to 'hijack' the election, a coup d'etat in the making?
(He looked close to tears and I thought I heard him say "goblok" (stupidly crazy) as he walked away from his just ended press conference.)
.........................
Footnotes
The internet traffic means that it's nigh on impossible to get online.
Pics from Straits Times.